The positive effects linked to the practice of yoga are undeniable: relaxation of tension, strengthening of the muscles, increase of the suppleness, improvement of the balance, the posture as well as the circulation…

Here are 10 really effective exercises that recommends, so that your body benefits from these benefits!

Starting position: sitting, knees bent in front of you, feet flat, arms on each side of the body.

Tilt the trunk backward until it is inclined at about 45 degrees to the ground, reaching out in front of you. Contract the abdominals and slowly lift the feet by extending the legs and pointing the toes. The legs form a “V” with the body. Hold the pose time to take five to six deep breaths. Release. 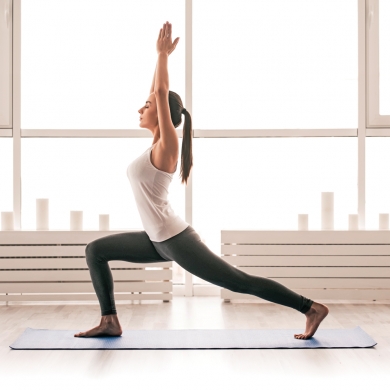 Using the forearms and toes, extend the legs by pushing the pelvis towards the ceiling. The arms are held in the starting position and the body forms an inverted V with the legs. Lower the head, push the chest in the direction of the feet to open the shoulders and press the heels to lower them. Hold the pose time to take five to six deep breaths. Release.

Contract the glutes to lift the upper body and legs. Catch the ankles with your hands and release the thighs from the floor to feel the stretch in the quads and shoulders. Raise the head and set a straight stitch in front, so that the neck is well aligned with the back. Hold the pose time to take five to six deep breaths. Release.

Starting position: sitting, elongated legs on the right side, the trunk slightly inclined to the left, the left hand in support of the ground aligned with the shoulder.

While contracting the abdominals, lift the pelvis by leaning on the outside of the left foot and unfolding the left arm. The trunk and the head are in a straight line with the legs. Extend the right arm towards the ceiling so that it forms a straight line with the arm resting on the ground. Hold the pose time to take five to six deep breaths. Release, then return to the initial position. Repeat on the other side.

What is the best yoga exercise to help improve posture?

What are some face slimming exercises?

Loading… MindYoga4U A Site To Learn More About Meditation And Yoga Menu home About Blog Contact Posted on January 12, 2018by admin Mind Control to Control Your Life Article written by Julio Rico integral program writers Silva Method Life When we talk about mind control, certainly many people may have mixed feelings, which can range […]

Mindfulness for beginners, Components and Principles Loading… In previous posts we have talked about Mindfulness , its possible applications with children and certain popular myths about this practice. In this Mindfulness article for beginners, we want to describe what are the fundamental principles related to attitude during the practice of mindfulness. It will be essential to take them into […]