Quick meditation to focus on

Today, it is becoming increasingly difficult for us to focus on one thing for a long time, more and more often we are doing (or rather trying to do) ten things at once – we work, read headlines, respond to emails and text messages, listen to music, watch videos on YouTube, we communicate in social networks. 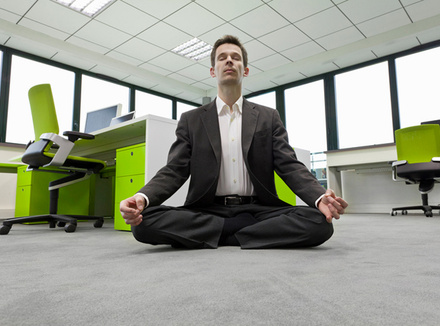 In most cases, such multitasking prevents us from focusing on one main task, as a result – productivity suffers.

Various techniques of meditation have been used since ancient times, including for training attention and concentration. Can a simple meditation session, which does not require much time and any preparation, help us to restore concentration of attention weakened by constant switching?

American psychologists Thomas Gorman (Thomas Gorman) and Shawn Green (Shawn Green) decided to test this. To do this, they conducted a series of experiments in which 48 students participated, some of them were especially prone to multitasking (in this case, this was the constant switching of attention between different sources of information) in everyday life, study and work.

During the experiments the students passed tests for concentration of attention. Before the tests and in between, some students looked through the sites on the Internet (switching between three different sites) and the other part for 10 minutes engaged in conscious meditation – they needed to focus on their breath, counting the exhalations and pressing the button on the keyboard after each exhalation. After 9 exhalations, you had to press another button and start the count from scratch. After a day or two the experiment was repeated, only groups of students changed places (those who meditated for the first time now watched the sites, and vice versa).

See also  What are the yoga exercises to be done regularly for fitness?
All participants showed the best results in tests for attention after meditation (compared to viewing sites). Those who were inclined to multitasking, as a whole, passed the tests worse, but it was they who were most helped by meditation.

“We decided that it is exactly meditation that can be well suited to those who are addicted to multitasking. In a sense, awareness is the opposite of multitasking – it requires deep concentration on one thing, “.

The effect of one short meditation session lasts not very long (less than a day), however, these results show that problems with attention due to entrainment by multitasking are not irreversible.

A conscious meditation (one of the options):

How Do I Become Mentally Strong?

What Is The Best Early Morning Habit For Success?

Time is valuable and there are a number of successful methods for goal realization. Yoga will cross train your mind and body for maximum potential. Imagine being able to optimize your attitude in an hour, a day, or less. Every day, people attend Yoga classes for mental or physical health, and walk away with the […]

Started by Yogi Bhajan Kundalini means “collapsed ring”, “folded in the shape of a snake. According to the ancient Indian medicine Ayurveda and yogis, Kundalini energy source located at the base of the spine around the sacrum, or at the base of the trunk. Symbolically depicted as a serpent coiled three and a half turns […]