Yantra Yoga is one of the oldest recorded systems of yoga in the world. It has come to us by way of Tibet, a land that holds a vast, rich Buddhist knowledge and heritage. Yantra Yoga’s unique series of positions and movements, combined with conscious breathing, can help coordinate and harmonize one’s personal energy so that the mind can relax and find its authentic balance. Many positions used in Yantra Yoga are similar to those of Hatha Yoga, but the way to assume and apply them differs significantly.

The best way to learn something is to reading book through the book we learn many information. So, the lot of books are there to learn yantra yoga. To buy a one of the best book for yantra yoga click this link.

Yantra Yoga uses a sequence that consists of seven phases of movement, connected with seven phases of breathing. In particular, the position in the central phase of each movement helps create specific retentions of the breath that work at a deep, subtle level. For this reason it is not only the main position, but this holding and the entire movement that are important.

The system of Yantra Yoga contains a wide range of movements that can be applied by everyone. It is a superb method for attaining optimal health, relaxation, and balance through the coordination of breath and movement. This fundamental and rich method is connected with the profound essence of the Dzogchen Teachings, although a Yantra Yoga practitioner does not necessarily need to follow a particular spiritual path, therefore anyone can practice it without limitation. It has been offered for the help of finding the true natural state.

See also  How do I practice meditation safely?

Yantra Yoga: Tibetan Yoga Movement
“Practice that helps to coordinate the body, energy and mind is incredibly important. It gives us balance and relieves stress. When our mind is relaxed, there is an opportunity for a harmonious and healthy life. “
Chogyal Namkhai Norbu
Yantra Yoga is one of the oldest recorded yoga systems in the world. She came to us from Tibet – a country of profound knowledge and wisdom. Unique complexes of movements and Yantra Yoga asanas merge with conscious breathing, helping to coordinate personal energy. In this way the mind can relax and come to its original balance. Ability to properly relax is the basic skill for a healthy and long life.
Many Yantra Yoga positions resemble Hatha Yoga asanas, but the way of entering them and the purpose of application are significantly different. Yantra Yoga uses complexes consisting of 7 phases of movements associated with the 7th phases of breathing. The position of the body in the central phase of each movement helps create a certain delay in breathing, which works at a deeper, subtle level. For this reason, in Yantra Yoga, the position of the body is not important, but how the sequence of performed movements affects breathing. 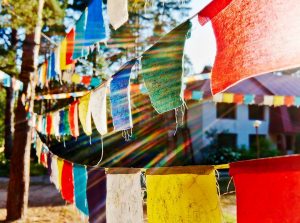 Anyone can study and practice Yantra Yoga. For the entry level, your physical data is not important: weight, age, flexibility or experience in other types of yoga. This is a wonderful method of achieving good health, relaxation and inner balance through the coordination of breathing and movement.
The profound method of Yantra Yoga is related to the essence of the Dzogchen teachings. However, it is possible to engage in Yantra Yoga, regardless of whether you follow any spiritual path.
History of Yantra Yoga
Yantra Yoga is based on the ancient text of Nyida Khajor, which means “Unity of the Sun and Moon”. This
text was written in the VIII century by an outstanding Buddhist master and translator of his time – Vairochana. Since then, this teaching has been continuously transferred from teacher to student without distortion.
Currently, the Tibetan teacher Chogyal Namkhai Norbu is the receiver of this yoga system. He began to teach Yantra yoga in the west in the 70’s. Based on his own experience and knowledge gained from his teachers in Tibet, Chogyal Namkhai Norbu wrote a detailed commentary on the text of Vairochana. His wonderful work is called “Impeccable Precious Mirror”. It was published together with the eighteenth-century indigenous text in a book called Yantra Yoga: Tibetan-Yoga Movement.
See also  How does one attain moksha through Jnana-yoga?

What is the purpose of Yantra Yoga?

What steps are there in the process of “Yoga Nidra”?

The influence of stress on the brain We all were once irritated or worried about something. It used to happen that they could not fall asleep for a long time thinking about a thought. Every person is familiar with experiencing stress. The yoga kit very useful for during yoga and It’s helpful to avoid injury while doing […]

DIFFERENCES BETWEEN YOGA AND PHYSICAL EXERCISE Many of you ask me about the differences between physical exercise and yoga. However, each body is different and complementing yoga with other forms of more vigorous exercise is fine. My advice is that asanas (yoga postures) should predominate during a workout and not the opposite. Just look quickly at the […]