WHAT DO THE 8 MEMBERS OF YOGA MEAN?

Why are you talking about 8 members of yoga? You will certainly hear about it during your practice or during your readings on the subject.

The yoga mat very useful for during yoga and It’s helpful to avoid injury while doing yoga to improve the posture of the head. And yoga mat is available in amazon. To buy a yoga mat click this link.

Patañjali would thus be the real or mythical compiler of the classic collection of  Yoga Sutra  (sutra = treatise, book on yoga), somewhere between the year 300 BC. AD and the year 500 AD

They are essentially rules of life described, in the form of 195  aphorisms (= definitions, moral precepts) in order to achieve happiness.

Eight steps that describe a moral line of conduct and self-discipline.

In the Yoga Sutras of Patanjali, the eight members of yoga, steps or branches are called  ashtanga  ( ashta = eight,  anga = limb, step, branch).

They represent an aid to good physical health and make us aware of the spiritual aspects of our nature.

Patañjali is described as the first “codifier” of  yoga .

The  Yoga Sutra represents a treatise on yoga, it is based on the Sāṃkhya school   (an orthodox school of  Indian philosophy ) and the Hindu texts of the  Bhagavad-Gītā .

We also find Yoga in  purāṇa  (name of a group of texts of Indian literature, composed between 400 and 1000 AD) These stories are mythological tales, religious and also based on the history of kings. all, preferably for women who did not have access to  veda * … only for men), and the  Upaniṣad **, a set of philosophical texts that form the theoretical basis of the Hindu religion .

His work is one of the major Hindu scriptures, and serves as a basis for what is called  Rāja Yoga *** or Royal Yoga! 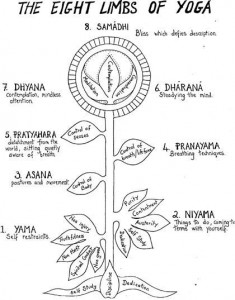 ** Upaniṣad (from Sanskrit upa: physical movement, neither: movement down and shad: to sit down, ie the idea of ​​”come and sit respectfully at the foot of the master to listen to his teaching”) .

Patañjali analyzes here the principles and psycho-physical techniques in the form of proposals as general as possible. This is not a manual to practice yoga.

Patañjali yoga is one of the six schools (or  darśana ) of  Hindu philosophy . Its sutra provides us with the oldest reference to the term  Aṣṭāṅga Yoga , literally “the eight members of yoga”.

What do we know about Patañjali?

As the writing of these three texts seems to span several centuries (from the 2nd to the 4th century BC) and does not really present a unity of style, modern textual criticism generally considers that Patañjali is the name of different authors some speak of a line of 14 Patañjali.

The study of the body, the word and the spirit being complementary, they represent an effort to understand the man in his totality.

There is nothing that can characterize him as being more “royal” than other forms of yoga, but his characteristic is that he indicates the royal way of controlling the mind.

This is the  yoga  based on the  Yoga Sutra  of  Patanjali . 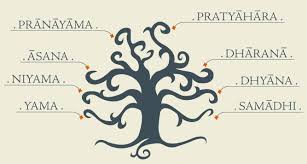 The term  Raja Yoga  is a  rétronyme  (note: that means a new word, a new expression), introduced the  XV th  century in  Hathayoga-Pradipika  (meaning “Thinning or small lamp  Hathayoga  “) is a classic text in Sanskrit , written by  swāmī Svātmārāma  , in order to distinguish this type of yoga from  haṭha yoga  that does not belong to the tradition of   orthodox Indian philosophy or āstika.

4 steps will help us control the vrittis (the fluctuations of the mind interacting with its environment).

RY is divided into two categories: an outdoor yoga and an indoor yoga.

will work and act on the extrovert aspect of our personality:

A) YAMAS: code of conduct towards others or external constraints. They address the harmonization of social and external interactions: it is in a way the moral code of our conduct in society.

The idea “Do not do to others what you would not want us to do”.

There are 5 Yamas ( external disciplines):
– Satya : the truth
– Ahimsa : nonviolence
–  Asteya : honesty (not stealing)
– Aparigrah a: non possession
– Brahmacharya : celibacy, abstinence from carnal relationship ( Brahma : transcendental reality and Achara the one who follows this direction). He who is in the higher consciousness is necessarily detached and is situated opposite to the carnal, sensual and sensory part.

B)   NIYAMA  : constraints on oneself

The five niyamas are :
Saucha: cleanliness
Samtosa: contentment
Tapas: spiritual austerity
Svadhyaya: knowledge of the sacred texts and of oneself
Isvara pranidhana: surrender to God. God is seen here as the inner Self, the Divine, the deep being in us, hidden, liberated.

Asanas, are the postures (or sitting) practiced in yoga, they constitute the third member. From the yogic point of view, the body is considered as the temple of the spirit. It is therefore essential to take care of it for our spiritual evolution. By practicing asanas, we develop a habit of discipline and a faculty of concentration, both of which are necessary for meditation.

D)  PRANAYAMA  : – release of the vital breath, use the breath as an object of concentration.

Pranayama, usually translated as the control of breathing, is the fourth step. It involves mastering the breathing process while recognizing the connection between breathing, mind and emotions. The technical term pranayama means “extension of the life force”. For the yogis, not only does it rejuvenate the body, but it also prolongs life. You can practice pranayama as a separate technique (by simply sitting to perform a series of breathing exercises) or pairing it with your daily yoga practice.

These four first steps of Patanjali’s Ashtanga Yoga are aimed at refining our personality, gaining some control of our body and developing an energy awareness of ourselves. All of this prepares us for the second half of this journey, which is more about the senses and the mind, and aims to make us reach a higher level of consciousness.

It is a work of interiorization, which operates from an approach of observation, analysis, reflection, contemplation, meditation and fulfillment.

Pratyahara, the fifth member, means withdrawal or sensory transcendence. During this stage, we make the conscious effort to detach our consciousness from the outside world and external stimuli. Being fully aware of cultivating a detachment from our senses, we direct our attention inwards. The practice of pratyahara allows us to step back to observe ourselves. This withdrawal allows us to objectively observe our desires: habits that may be detrimental to our health and may hinder our internal development.

F) DHARANA : concentration, keep the mind fixed on a point

Each step prepares us for the next one, so the pratyahara practice creates the conditions for dharana, concentration.

Getting rid of outside distractions, we are then able to handle the distractions of the mind itself. Which is far from easy! In the practice of concentration, which precedes meditation, we learn to slow the process of reflection by focusing on a single mental object: a specific energy center in the body, the image of a deity, or the silent repetition of a sound. We have, of course, already begun to develop our concentration skills in the three previous stages of posture, breath control, and withdrawal of the senses. In asanas and pranayama, even if we focus on our actions, our attention wanders. Our center of attention is constantly moving in order to refine the many nuances of a particular posture or breathing technique. In pratyahara, we observe ourselves. In dharana, we focus on one thing. Extended periods of concentration naturally lead to meditation.

See also  Why do yoga?

G) DHYANA : Deep meditation, the mind remains fixed and is no longer sensitive to disturbances

Meditation or contemplation, the seventh step of ashtanga, is the uninterrupted flow of concentration.

Although the notions of concentration (dharana) and meditation (dhyana) seem to come together, there is a subtle distinction between these two stages. While in the practice of dharana, we fix our attention on one point, dhyana is a state of mindlessness without concentration. The mind is then appeased, and in this silence, it produces little or no thoughts. The strength and endurance that this state of quietness requires are quite impressive. But do not be discouraged! It may seem difficult, if not impossible, but remember that yoga is a process. Even if one fails to achieve perfect posture or ideal state of consciousness, every step of our evolution is beneficial.

H) SAMADHI : deep contemplation or state of union with the inner “god” ( atman ) or absorption in the absolute ( brahman ).

Patanjali describes this eighth and final stage of ashtanga, samadhi, as a state of ecstasy. During this stage, the meditator merges with the object of his meditation and transcends the self. He comes to realize a deep connection with the Divine, an interconnection with all living beings. This realization is accompanied by the “peace that allows all understanding”; the experience of happiness and to be one with the Universe. At first glance, this kind of goal may seem somewhat idealistic, even pretentious.

But if we think about what we expect from life, would not joy, fulfillment and freedom have their place on our list of hopes, wishes and desires?

What Patanjali describes as the completion of the yogic journey is, in essence, what all human beings aspire to: peace.

We could also reflect on the fact that we can not buy or possess this ultimate stage of yoga, “enlightenment”.

In summary:  The eight members of Raja Yoga are:

What are the eight stages of Patanjal Yoga?

What is chakra meditation?

4 yoga exercises you can do with your students at the start of the day In the framework of an event called VivoYoga, the Yoga Edu project will carry out an activity to expose and highlight the positive effects of yoga in education. More and more teachers dare to use yoga as a pedagogical tool […]

Many parents wonder if useful yoga Loading… in adolescence. This is the period when the body is undergoing significant changes: the formation of a new shape, hormonal changes, violation of emotional balance. Should I do yoga to teenagers that affects the physiological functions of the body and the psycho-emotional state? Let us try in this […]